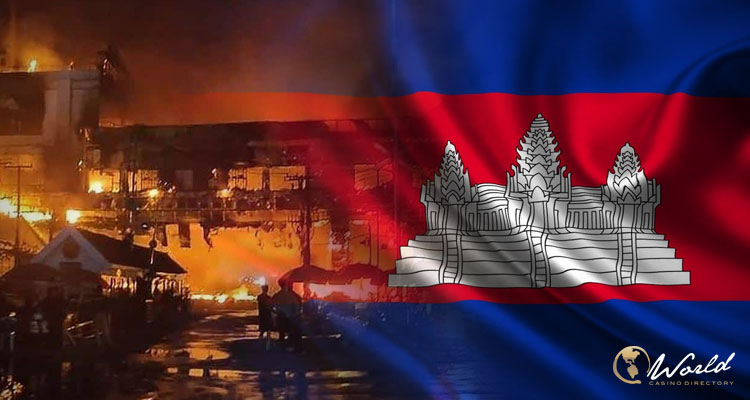 A major fire broke out at the Grand Diamond City Casino and Hotel in Poipet, Cambodia. However, news agencies have different opinions on how many people died in the fire. Some say 16, some 19, some 10 but one thing is certain – many people were killed and injured and the exact number is still unknown!

An unidentified number of people are on life support (at least 13), missing, dead or presumed dead following an unexpected fire at the Grand Diamond City Casino and Hotel in Poipet, Cambodia near the border with Thailand. The fire broke out on Wednesday, December 28, at midnight.

However, it is expected that during the search more bodies and seriously injured people will be discovered.

Most of the dead and injured were Thais, Chinese, Malaysians, Vietnamese and Cambodians.

The fire was extinguished on Thursday, December 29, at 2 PM.

In this regard, Sek Sokhom, head of Banteay Meanchey’s information department, said: “The blaze at the Grand Diamond City hotel-casino in Poipet, on the Thai border, which started around midnight on Wednesday, was finally put out at 2 pm on Thursday.

“A local Buddhist temple was being prepared to receive the dead.”

In an interview with Cambodia’s Bayon Radio, Ngor Meng Chroun, the province’s deputy governor, said: “The death toll had reached 16, with about 50 other people injured. The number of deaths appeared likely to rise, as more bodies of those trapped inside were discovered and critically hurt people succumbed to their injuries.”

Sa Kaeo, Governor of Parinya Phothisat, said: “Another 60-odd people caught up in the conflagration had already been checked and cleared by Thai hospitals.

Unknown cause of fire:

Banteay Meanchey, police chef of Sithi Loh, said: “360 emergency personnel and 11 fire trucks had been sent to the scene of the fire, whose cause was not yet known. The casino employed about 400 workers.”

Montri Khaosa-ard, a staff member at Thailand’s Ruamkatanyu Foundation, a social welfare organization that sends volunteers emergency sites, said: “Right now, we are trying to bring the dead bodies from the building down. I don’t think there will be any survivors because of very thick smoke. Even we all [the rescue staff] have to wear proper gear when we go inside the building, otherwise we cannot breathe at all.

“The blaze started on the first floor but spread quickly along the carpets, leaping up through the multi-storey building.”

In this regard, Sek Sokhom said: “Although the cause of the fire remains unknown, an initial investigation showed that the supposed cause of fire was an overload because of the New Year’s decorations drawing increased electricity, causing wires to overheat and burn.”

Photos from the scene:

Photographs from the scene show the tragic events during and after the fire! One photo shows injured people on ledges huddled together desperately fighting to stay alive and another shows people jumping from open windows to escape the fast-spreading fire.

Many images show burning buildings, desperate firefighters trying to contain and extinguish the blaze and people being rescued from the rubble.

In this regard, a source from the Thai Ministry of Foreign Affairs said: “We had been coordinating closely with local authorities, including by sending in fire trucks from the Thai side.”

On Twitter, The Department of Fire Prevention, Extinguishing and Rescue stated: “Calls for help were heard from the 13th, 14th and 15th floors at 4 am and hands were seen waving from windows as well as a mobile phone’s flashlight signalling from inside the complex.”

According to a video posted online by the fire department, one of the firefighters said: “The fire was massive, and was inside the casino, so it was difficult for our water cannons to reach it and that was the reason the fire continued burning for such a long time.”

Although casinos are banned in Thailand, its neighboring countries such as Myanmar, Cambodia and Laos mainly rely on the casino industry, especially Cambodia as a popular tourist destination with connections around the world.

Before this fire, during this year there were two fires in entertainment facilities in Thailand and Vietnam.

In August there was a fire in a Thai nightclub, which killed 26 people and injured many others and in September another fire broke out in Vietnam in which 32 people died in a karaoke bar.

Unfortunately, that’s not all as another big fire broke out at the New Year’s party at the Santika club in Bangkok, killing 67 people and injuring more than 200!

The CEO of the club was charged and sentenced to 3 years in prison for a fire that broke out when fireworks were set off while a rock band was on stage.

People in Cambodia have long expressed concern over the province’s neglect towards health and safety regulations, especially in its many bars, nightclubs and entertainment facilities.